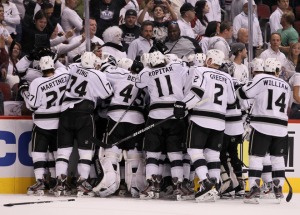 The City of Los Angeles has a history for spiritual awakenings. I believe that a greater move of the spirit is at hand and it will come very quickly. On Friday, 13, 2014 at the Staple Center in Los Angeles, the LA Kings went on to win the Stanley Cup Championship in double overtime. I had not really been following the games but I would hear people excitedly talking about this as time progressed. You see, in the playoffs they had initially lost the first three games and the next one they would have been eliminated.

But the coach of the Kings, Daryl Sutter, had them focus on working together as a team! They pulled it together to win and go into the Stanley Cup Championship against the New York Rangers. It was an incredible victory! I sensed that something was going on in the spirit and God was using this as a metaphor.

And then on Friday 13, 2014, in the evening I was at a prayer meeting in Los Angeles, CA. At 8:00 p.m. I heard these words speak through me by the spirit of God, “Just as I poured out my Spirit in 1906 during the Azusa Street outpouring I am going to pour out my spirit in a double portion over the City of Los Angeles and California which will reach the world. I chose a black man named William Seymour to bring forth a movement! And now I am going to crown the LA Kings to show the world that you can come from behind to win. Watch me move now and see a great power play and the GREATEST SHOW ON EARTH to begin.”

There were eight of us at this small gathering and I knew that something had shifted. I knew the LA Kings were going to be playing their final game but only The Lord knew the outcome of the game. So on Saturday morning when I woke up I googled to see the outcome. And I was excited to see that they had won in double overtime! God is going to give us double for our trouble! Many have been hearing that a greater move of God is coming than the Azusa Street Outpouring. But for some of you who don’t know about what Azusa Street was let me give you a little history lesson.

William Seymour was a one-eyed black man who was the son of former slaves. He was hungry for God and attended a bible school in the south where he had to sit outside the door to learn. Segregation had even infiltrated the Christians and the Jim Crow laws were in effect. He was invited to come out to Los Angeles and be the pastor of a small church. He arrived on February 22, 1906, and started preaching to small crowds on Santa Fe Street. His message was that the “Next move of God” was getting ready to be poured out in Los Angeles and that the congregation should be expecting and believing for the power of the Holy Spirit to come!

When he went back that evening for another service the church had been padlocked! The woman who had invited him to come out and be the pastor did not believe in the baptism of the Holy Spirit of which William Seymour was contending for.

He eventually found his way over to a home on Bonnie Brae street where a small group of people would come and pray. The couple felt sorry for William Seymour in that he was homeless and penniless and invited William to stay with them. He spent hours in prayer and fasting before the Lord. One day one of the men told William that he had a dream where the 12 apostles came to him in a dream. They told him he could be filled with the spirit this man asked William to pray for him. William prayed for him and immediately this man was filled with the spirit with the evidence of speaking in tongues. They were ecstatic! What they had been praying for was now happening.

Now the news spread quickly around the neighborhood and many came to this small house and received the baptism of the Holy Spirit. William and the others at the house also received this outpouring as well. Before long there were crowds of people outside and surrounding the house. Eventually the porch fell in because of the weight of all the people but no one was hurt.

William was told he would have to find another facility to meet in. So he started looking around and found an abandoned two story building located in the old downtown industrial district on 312 Azusa Street. It had once been a church but now the first floor was used as a stable with rooms to rent upstairs! They cleaned up the building and started inviting people to come and experience the presence of The Lord! People started flocking to this small building and were experiencing God’s presence and power. All different types and demographics of people starting coming. It was as if God opened a portal of heaven over that place and poured out His love and power. Miracles were in abundance and the glory of God was so present that people would fall on their face repenting of their sins.

The first secular news reports of the revival appeared on April 18, 1906 (Just 9 days after the outpouring started)! It was the same day that the devastating earthquake in San Francisco happened! God was indeed making a statement. The message at the mission was “The Love of God”! People were careful not to speak negatively about anyone and love each other….no matter what their age, color, economic situation, etc.

By the summer the crowds had reached staggering numbers – often into the thousands. The scene had become an international gathering place! Thousands of pastors and missionaries had come from across the globe to come to Azusa Street to experience a touch of God. They then went back to their continents and impacted their culture with the same message and power.

It is stated that over 550 million Pentecostals and Charismatics can trace their spiritual ancestry back to this awesome event! William Seymour had been shown by God that after 100 years there would be a greater outpouring in Los Angeles than Azusa Street. Another wave is at hand of God’s spirit and the Lord is going to Crown this Town! It’s not just for LA but the whole world. God is making us Kings and through the media the message will be broadcast around the globe and affect billions. Arise and shine your light has come! Let’s take hold of this message and press into the Lord. He can take a handful of people who are in unity to change the world. Let’s believe that this is the time of history for this to happen. Let’s go for the GOLD!

Comments on “The City of Angels – Time to Crown this Town”