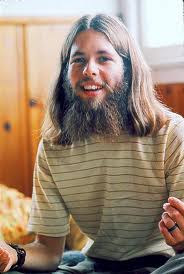 In 1967 there was a 17 year old young man named Lonnie Frisbee.  He had gone up to Tahquitz Canyon and dropped LSD.  He cried out to God, “God if you’re real….reveal yourself to me!”  All of a sudden the canyon started to change.  He had a vision of the Pacific Ocean.  But instead of being filled with water it was filled with people.  They were all in darkness and lost!  Jesus then appeared to Lonnie and told him that God was putting a light on him to reach lost people.

At the same time in history there was another middle aged man named Chuck Smith.  He had been pastoring a small church for 17 years and was disillusioned.  He didn’t feel that he was making an impact anymore and was thinking about quitting the ministry.  Chuck and his wife, Kay, used to go down to Laguna Beach and watch all the hippies as they would sit on the sidewalks.  Chuck would shake his head and say, “Dirty hippies, why don’t they take a bath”.    But his wife would cry out and say, “Chuck, don’t say that!  We have to reach these kids! “

“If you ever see a hippie – bring one home!”

Chuck went home and told his kids, “If you ever see a hippie – bring one home!”   Well the Lord caused the path of these two men to connect.  Lonnie used to hitchhike around southern California to tell people about the Lord.  One day he was hitchhiking and Chuck Smith’s daughter’s boyfriend,  John, saw Lonnie and picked him up.  He brought him home to meet Chuck and the rest is history.

The moment the door opened and Chuck and Lonnie met there was an immediate connection.  Lonnie started attending the small church and bringing hundreds of hippies to the services.  Within a few months the church had exploded into a movement!

They started doing mass baptisms at the ocean in Corona Del Mar.  Time magazine heard about it and started covering the story.  They started calling it “The Jesus Revolution” and even put Jesus on the cover of Time.

The Jesus Movement had begun!  It was very different than the established church of its time both in style and substance.  The differences were very obvious in style.  The Movement’s leaders and workers were long-haired bearded 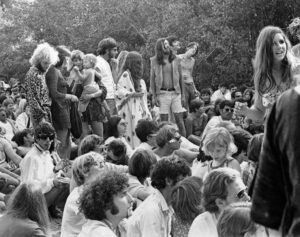 hippies in sandals who sang and preached on street corners, parks and coffeehouses, baptisms were often in the ocean at popular surfing beaches, and folk-rock “Jesus music” became a lasting form of contemporary worship that’s still popular in many churches today.

Some in the movement adapted aspects of the sixties counterculture including peaceful demonstrations, marches, and communal living.  But the hallmark of the Jesus Movement was its return to a simple Gospel and the New Testament prototype of Christianity, centered in the life and teachings of Jesus and demanding a personal relationship with him, placing a renewed emphasis on discipleship, evangelism and Bible Study.  It wasn’t about political or social agendas, it was about Jesus and His life in us and centering our lives around His teachings.  It caught a lot of traditional churches by surprise, sounding a wake-up call to comfortable Christians while proclaiming good news to those outside.

A Revolution of Righteousness

Well, I believe that we are at a similar time in history where another revolution is at hand.  But this will be a revolution of righteousness and it will be greater than the former Jesus Movement.

The young people of today really don’t get impacted by the mega churches which have exploded around the country.   They want something to believe in that they would give their life for.   God is looking for radical believers who will give their whole life for the Lord.  Lonnie Frisbee was one of those radicals who God used in a tremendous way to reach the culture during that time.

In 1996 the Lord spoke to me and said that there was a greater wave coming to this country than the Jesus Movement.  He told me to call my organization “Youthwave” and the slogan would be, “Be a part of the new wave!” 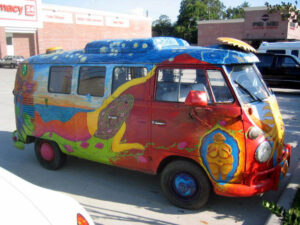 The new wave is here NOW!  It’s time to get on board and prepare for the new thing which God is breaking forth in California.  But get ready for God to use things which possibly could offend you or the church.

But God is blowing everybody’s minds….because He’s saving the hippies.   And nobody thought a hippie could be saved.  Get ready for God to use the foolish thing to confound the wise.  Get ready for a huge tsunami of God’s love and grace which are going to rock our culture.  Surf’s up dude…grab your boards and get ready for the ride of your life!

Comments on “Another Jesus Movement is at Hand”